This was our inaugural Fall Warbler Weekend.  The Spring Warbler Weekends were such a hit that we decided to try a Fall one out too.  We had six participants for the weekend.  The weather could not have been better.  It was mid 70’s during the day and high 50’s at night.  This time of year, the North Carolina mountains see an influx of migrant passerines fueling up for their long trips South.  We are lucky to get them in abundance at a few key spots in the region.  The ridges of the Blue Ridge Parkway can be awesome first thing in the morning.  Birds are zipping past your head over the mountain tops.  Fuel rich habitat islands, such as wooded municipal parks, are also great for studying the birds in transitional plumages that we don’t get to see in the Spring.  It is a great time to bird in our mountains!

We all met at our hotel and headed out for some birding on the afternoon of the 16th.  Our stop for that afternoon was Lake Julian Park in South Asheville.  We enjoyed looks at Black-bellied Whistling Duck, Magnolia Warbler, Hooded Warbler, Cape May Warbler, and many others.  It was a good warm up for the weekend to come.

The next morning, we woke early and headed up to the Blue Ridge Parkway.  Our destination was Ridge Junction.  This gap near the highest mountains in the East has traditionally been a great flyway for migrating birds.  We arrived at dawn to the sounds of birds whizzing overhead.  Tennessee and Cape May Warblers were the most abundant birds going overhead.

There were also a few Swainson’s Thrush and Rose-breasted Grosbeaks stopping in for looks.  Our best bird of the morning was a cooperative Wilson’s Warbler right at the base of the entrance road to Mount Mitchell.  We had high elevation specialties such as Red-breasted Nuthatch, Golden-crowned Kinglet, and Common Raven also in the area.

We had lunch at the Craggy gardens picnic area, enjoying the beautiful views.  Dark-eyed Juncos begged for morsels.  Post lunch birding was done at the North Mills River Overlook.  We took a small break from passerines to do some hawk watching.   This is one of the better spots in the area for migrating raptors.  We had good luck seeing some close Broad-winged Hawks.  We rounded out the day near Asheville at Westfeldt Park.  Here we had our first American Redstart, Northern Parula, and Black-and-White Warbler.  It was a good way to end the day of birding.  We had dinner at Sierra Nevada brewery and recapped the day.

Sunday required less driving, which was nice.  We first headed to Jackson Park.  This large municipal park in Hendersonville is one of the best places for warblers in the state in the Fall.  We spent the majority of the day here and came away with a very nice bird list.  We recorded fourteen species of warblers here at the park.  Early in the morning we had a nice flock which included Chestnut-sided Warblers, Tennessee Warblers, Northern Parula, Canada Warbler, and several others.

We encountered a very cooperative Nashville Warbler that allowed for some great photos.  Trip first Yellow-throated and Blackburnian were a treat.  We also had a nice selection of non-warbler migrants as well including Scarlet Tanager, Yellow-throated Vireo, Red-headed Woodpecker, and Swainson’s Thrush.

This was a lovely way to spend most of the day.  We finished the day back at Westfeldt Park finding a few more birds, but nothing new for the trip.

The final morning, we birded Beaver Lake Bird Sanctuary in Asheville.  This small Audubon sanctuary tends to be a great migrant trap.

We had a nice morning here and added a few new trip birds.  We had great looks at Black-throated Green Warbler, and a cooperative Double-crested Cormorant.  The highlight of the morning was a rare Fall migrant Blackpoll Warbler.  It put on quite a show hawking insects over the meadow.  Our grand finale if you will!

We had a great weekend that ended up with twenty species of warblers.  This was a great group of folks that were very enthusiastic about migration and birds.  I have a feeling that we will add Fall Warbler Weekends into our schedule for quite a while. 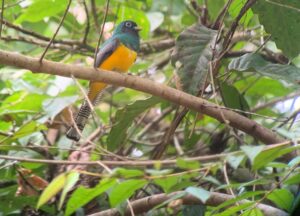 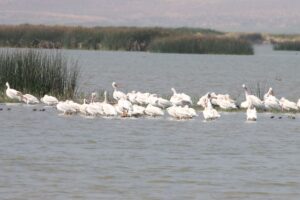