Our quick, week-long Guatemalan getaway was focused on birding the foothills and highlands, from the slopes of the Volcano Atitlán to the beautiful city of Antigua, for an assortment of range-restricted species and regional endemics.

The excellent Los Andes Nature Reserve was our first destination and an early start to the day ensured that we would arrive with the entire day to spend here.

Some quick stops on the main road in produced our first views of White-throated Magpie Jay, Gray Hawk, Black Phoebe, and Grayish Saltator. After re-energizing with a cup of coffee grown on the reserve, we were ready to explore the mix of coffee, quinine, tea, and macadamia crops and forested slopes and ravines. A fun 40-min ride in the back of a pick-up truck took us to a nice patch of cloud forest higher up in the reserve.

The main target for the afternoon was the Azure-rumped Tanager. Soon after entering the forest we had numerous Townsend’s, Wilson’s, and Golden-crowned Warblers and Slate-throated Redstarts. The fantastic songs of Brown-backed Solitaires rang out from all around us while raucous flocks of Bushy-crested Jays moved through the forest. We enjoyed fine views of Green-throated Mountain-Gem, a hummingbird endemic to Northern Central America.

We at last saw a few Azure-rumped Tanagers, along with a spectacular male Blue-crowned Chlorophonia and the abundant Yellow-winged Tanager. On the walk back down, a short jaunt off-trail with our excellent local guides got us incredible views of a male Resplendent Quetzal, another target on the group’s most wanted list.

Around the lodge, the gardens and hummingbird feeders attracted a nice variety of birds to keep us busy for the afternoon – Rufous & Violet Sabrewings, and Blue-tailed & Ruby-throated Hummingbirds formed a constant stream of activity around the feeders, while Clay-colored Thrushes, Baltimore & Spot-breasted Orioles, Golden-fronted Woodpeckers, Black-headed Saltators, and Melodious Blackbirds were seen in the gardens.

The next morning we birded our way up through the coffee plantation, where some early morning sunshine and clear skies brought out the raptors.

A soaring Hook-billed Kite was a bit of a surprise and we also managed Black and Ornate Hawk-Eagles. A short scramble down a steep incline gave us stellar views of lekking Blue-throated Goldentails. It was soon time to be on our way to the reserve of Los Tarrales – but not until we’d enjoyed another delicious meal and fresh coffee!

Los Tarrales is only about an hour and a half away on the slopes of the same volcano as Los Andes, but being on a different side and at a lower elevation, we knew that it would have some different birds.

An easy afternoon stroll up the main track took us past verbena flowers abuzz with Cinnamon Hummingbirds and treetops full of Blue-gray Tanagers, Red-legged Honeycreepers, and Boat-billed Flycatchers. An inquisitive Ferruginous Pygmy-Owl gave us great views in the afternoon light and White-bellied Chachalacas gave their noisy calls around the grounds.

The next morning we further explored the forest via the Rinconada Trail, which climbs up in elevation to a few different viewpoints.

The forest was alive with birds – from the beautiful Long-tailed Manakin, and Collared Trogon, to the diminutive Tody Motmot and the boisterous Rufous-naped Wren. A soaring King Vulture was a nice addition, and Tennessee Warblers were everywhere! Close encounters with Lesson’s Motmot, White-winged Tanager and Ivory-billed Woodcreeper all added to the morning’s diverse experience.

After lunch, we left the Volcano Atitlan for the lake of the same name.

A brief stop at the Mesoamerican Permaculture Institute (IMAP) turned up the only Slender Sheartail of the trip, a female perching in the reeds on the lakeshore. We found a nice raft of Lesser Scaup, Ring-necked Duck, and Redhead on the lake. A Sora called out from the reeds while Green Herons stalked among the edges. We arrived at our hotel in Santiago Atitlan with a bit of time to enjoy the gardens and take in the lake view before dinner.

The optional hike up Volcán Tolimán was planned for the next morning and a few of our group were just crazy enough to give it a shot – the allure of the Horned Guan was just too strong not to!

We met shortly after 4 AM for coffee and to grab our pack meals for the day, and we were off, on foot, straight out from our hotel. A path picked up in the middle of town soon led us steadily uphill into coffee and avocado plantations. Soon enough we were hearing the calls of Great Horned Owl, and we got good looks at a Whiskered Screech-Owl calling overhead. Mexican Whippoorwills and Fulvous Owls were all heard before first light, as were the high-pitched screams of Highland Guans.

A flock of about 45 Gray Silky Flycatchers moved from treetop to treetop, while Bar-winged Orioles and Blue-throated Motmots called around us. The locals had crops growing even this high up and we passed corn and red and black beans on our way to the primary forest farther up. The trail had now become an unrelenting, continuous climb uphill, and we could feel the air getting thinner as we climbed. We took our time and continued birding during our breaks, finding Hermit and Crescent-chested Warblers, Greater Pewee, Rufous-collared Robin, and Rose-throated Becard on the way. Just as we were reaching our limit, our local guide returned from a side trail to say he’d just heard a Horned Guan calling. We left the main trail and excitedly followed Freddy. The trail soon became non-existent and the footing more treacherous, but we soon were in position and all managed wonderful views of this absurd species. After obtaining a few photos and appreciating this ‘unicorn turkey’ to the fullest, we began to make our descent, now in excellent spirits.

We had found the guans before 10 AM, and now had the rest of the day to bird our way back down the way we came. We found Mountain Trogons and Blue-and-white Mockingbirds. We got incredible looks at a rufous morph Northern (Guatemalan) Pygmy Owl being mobbed by a Rivoli’s Hummingbird and killer views of a pair of Rusty Sparrows near the end of our hike.

The other half of our group which skipped the hike enjoyed a more leisurely day with a full breakfast and later start. Even still, they managed to get wonderful looks at a Blue-throated Motmot, something that the rest of us ended up missing this trip!

Finca Chichavac’s pine oak woodlands was our stop the next morning, which began cool and clear (we certainly needed our jackets!). Steller’s Jays greeted us as we stepped from the van, along with Black-vented Orioles, Blue-and-white Mockingbirds, and Hutton’s Vireo. On the cattle farm we enjoyed great looks at Tufted FlycatcherRed-faced Warbler and the only Spotted Towhee of the trip. Pink-headed Warbler, endemic to Mexico and Guatemala, was one of our main target birds and we eventually got incredible views! We also added a lovely male Amethyst-throated Mountain-Gem and Pine Flycatcher.

After a filling lunch and a delicious corn cheesecake (it’s way better than it sounds) at a restaurant built in the style of a Swiss chalet, we headed to Antigua with the afternoon free to shop and explore.

Our hotel, the Posada Don Rodrigo, encompasses three historic houses dating back well over 300 years (it is said to be one of the oldest buildings in the Americas), and provides a convenient location from which to explore the cobblestone streets and picturesque Spanish Colonial architecture of this small and colorful Guatemalan city.

The postcard view of the Santa Catalina Arch set amid the backdrop of the towering Volcán Agua was visible right outside the hotel entrance while Central Park and the La Merced Church were both less than a 5-minute walk away. The vibrant, bustling streets were quite the change from what we’d been experiencing on the trip so far, but it was nice to switch gears and take in the non-avian sights for a bit!

Our final birding stop of the trip was at Finca El Pilar, located just 10 minutes from our Antigua hotel. At the observation area, several Black-headed Siskins joined a female Rose-breasted Grosbeak in the top of a bare tree while a small flock of colorful Hooded Grosbeaks flew overhead.

A pair of Collared Forest-Falcons were too well hid to lay eyes on but we enjoyed hearing their hilarious calls. Acorn Woodpeckers and Townsend’s Warblers were everywhere! The overlook view of three volcanoes – Agua, Acatenango, and the smoking Fuego – was nothing short of spectacular!

After lunch, we visited the nearby Museo Santiago de los Caballeros, which offered a fascinating insight into Guatemala’s colonial history. Soon enough though it was time to make our way back to Guatemala City, where we would have dinner and tally up our checklists for the final time. In just one short week our group encountered 221 species including all the big targets – Pink-headed Warbler, Azure-rumped Tanager, Horned Guan, and Resplendent Quetzal!

A special thanks goes out to Daniel Aldana and Operador Latino, as well as the other local guides Freddy, Chus, and Salvin, plus our amazing driver Luis, and last but not least our wonderful group of clients – for making this a fantastic and memorable trip. 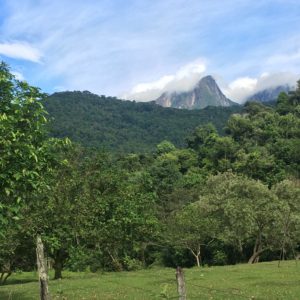 Regua Lodge and excursions, Rio do Janeiro, Brazil November 22-30, 2019 To many people, Brazil evokes beaches, bronzed bodies and lively entertainment, while to others it’s a land of vast rainforests, unique birds and critically-endangered ecosystems. It’s a huge country and on this trip we were only going to see a small part of the […] 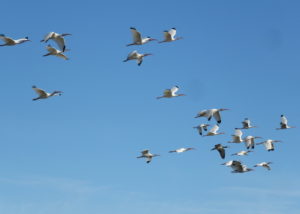