Narrative and Photos by Clifton Avery

Our weeklong tour in North Dakota focused on birding in the central ‘Prairies and Potholes’ region all the way west to where the landscape dramatically shifts to the Badlands. Baird’s Sparrow, Sprague’s Pipit, Piping Plover, Brewer’s Sparrow, and Long-billed Curlew were a few of the target species we hoped to encounter.

The night before the first day of the trip we all arrived in Bismarck and had dinner together and got to know one another a bit, sharing our hopes and excitement for the upcoming trip.  The next morning, we began heading west, crossing to the west side of the Missouri River and birding in Fort Abraham Lincoln State Park. Piping Plover, Least Tern, 5 species of swallow and a nice variety of eastern US birds gave us a nice start to the trip. Lunch at Sweet Briar Lake was beautiful as we observed American White Pelicans slowly soaring over the water. We finished out the day birding some local lakes around Dickinson where we would be staying the next couple nights.

The next morning we began birding in the Little Missouri River National Grassland. A small herd of Pronghorn crossed over the vast prairie as well as a pair Gray Partridges. We had our first Sprague’s Pipit, a lifer for many!

We then headed into the Badlands of Theodore Roosevelt National Park. It was hot but the scenery was stunning. A truly desolate landscape of rocky peaks and buttes with very little vegetation except along the Little Missouri River where Cottonwoods and other plants could subsist.

We were birding in the south unit of Theo Roosevelt NP and we drove the 25 mile loop within the park that has numerous pull-offs and hiking trails to explore for birds and other wildlife. Small herds of Bison roamed throughout the park giving us a glimpse of what life used to be here hundreds of years ago before people hunted all of the bison out. Say’s Phoebe, Violet-green Swallow, and Mountain Bluebird were some nice finds within the park.

The next day we returned to the Little Missouri River National Grassland in hopes of finding the range-restricted Baird’s Sparrow. No luck but we still found lots of nice prairie birds including our first Dickcissels of the trip. Before entering the national park we stopped just outside of the entrance at the Medora water treatment plant and had our only Bullock’s Oriole of the trip fly by. This proved to be the hottest day of the trip, but we still managed to find some good birds including a handful of Rock Wrens and a pair of Prairie Falcons.

Midafternoon we began driving to the southwest corner of the state and on the way down we stopped off to see some reported Burrowing Owls. We also had our first Chestnut-collared Longspurs. We arrived exhausted from the heat and long day in Bowman where we had a quick dinner and turned in for the night.

We began the next morning birding the Bowman water treatment plant. A pair of Wilson’s Phalarope and their newborn young walked around at the edge of the water giving us excellent views of the little fluffball fledglings. We then headed towards the southwest corner of the state birding in the Rhame Prairie. The calls of Long-billed Curlew overhead brought our vehicles to a screeching halt and we were lucky to have a few curlews fly in close and land. As you move closer to the Montana border the vegetation begins to change into sagebrush habitat, which is where one can find Brewer’s Sparrows. We had a few Brewer’s Sparrows as well as our first Ferruginous Hawks.

We dipped into South Dakota and Montana for a quick bird list and photo before beginning the long drive to Jamestown. On the way we stopped off again in the Little Missouri River National Grassland and finally got glimpses of a Baird’s Sparrow. The effort in viewing this bird involved me running around in the grasslands trying to flush the bird in the direction of the group. It kind of worked! We had lunch under some large cottonwoods and saw our only Red-headed Woodpecker of the trip there. A big storm was brewing, so we got back on the road, had dinner in Bismarck, and rolled into Jamestown as the sun was setting.

The next day was our first day of birding in the pothole region but first we had to stop at the world’s largest buffalo to examine the enormous statue. Surprisingly, we did pick up a few new birds for the trip at the buffalo statue such as Yellow-bellied Sapsucker.

The next stop was Arrowwood National Wildlife Refuge and it was spectacular. Dozens upon dozens of Marsh and Sedge Wrens sang from the vast wetlands that lined the lakes which housed thousands of waterfowl. We had lunch at the visitor center which was closed and it was raining, but we spread out our picnic under an awning and enjoyed watching a colony of Purple Martins and a nesting Say’s Phoebe as we ate our sandwiches. After lunch we continued to bird around Arrowwood flushing a roosting Great Horned Owl before the rain forced us to move on.

Our final stop of the day was Chase Lake NWR where we continued to see a large diversity of waterfowl. We also had our first American Avocet. Four Black-crowned Night-Herons flew over, another first, before we had to turn towards our hotel. We had dinner at a classic roadside diner before arriving at our hotel in Steele, ND.

The pothole birding continued to be the theme the next day as we stopped at numerous bodies of water ranging from small ponds barely bigger than our vehicles to vast lakes such as Horsehead Lake. Enormous numbers of waterfowl continued to rule the day but we also had some other highlights. We got our best looks at a handful of Sora as they called and foraged among the wetlands. Dozens and dozens of Yellow-headed Blackbirds stunned us with their beautiful colors and caused some of us to cringe whenever they vocalized. For the record, I think their call is wonderful!

Black Tern, Ferruginous Hawk, and Canvasback were two of the favorite sightings for the day. Horsehead Lake was especially spectacular and we had our first Nelson’s Sparrow of the trip. Our final stop of the day was Dewald Slough and it didn’t disappoint either giving us highlights such as White-faced Ibis, Dickcissel, Common Tern, and Caspian Tern. We drove to Bismarck for dinner at a cool brewery with excellent pizza. Night in Steele.

Our final full day of birding in North Dakota was mostly birding the potholes trying to pick up two targets, LeConte’s Sparrow and Clark’s Grebe. We had some luck finding a Clark’s Grebe at the first stop of the day. We also had a Least Bittern fly through the marsh, a first for the trip as well! Chestnut-collared Longspurs gave the photographers good opportunities at the Kunkel School Prairie. We had our lunch back in Steele at a small park where a few California Gulls watched us to see if we left any food scraps. Back to Horsehead Lake and the surrounding area to search for LeConte’s Sparrow but we had no luck. However, we did find displaying Wilson’s Snipe and large numbers of Dickcissels and other grassland/marsh birds. We returned to the same restaurant in Bismarck as the night before because it was so delicious! A wonderful final meal together.

Here are a few more photos of birds from the trip that were not mentioned above:

Our final day of the trip began with us birding a slough just outside of Bismarck where we had nice numbers of Sora calling. Then we turned south and stopped at Long Lake NWR, which had spectacular views of the surrounding countryside. We drove south all the way to the Beaver Creek Recreation Area, a section of the Missouri River, where we found some staked out Bell’s Vireos. We also found a number of new birds for the trip including Blue Grosbeak and Eastern Wood-Pewee. We spread out our picnic lunch and enjoyed one another’s company one more time before heading back to Bismarck and departing for home. We ended the trip with 160 species and lots of lifers for everyone, well except Simon!

2 thoughts on “Venture to North Dakota” 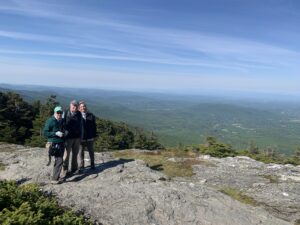 Boreal Forests & Bicknell’s Thrushes American Explorer Series May 30 – June 5, 2021 By Aaron Steed Our maiden Vermont Venture was primarily based in Burlington, Vermont’s largest city. Our hotel was just a few minutes from Shelburne Bay, located on the eastern shore of Lake Champlain. A cluster of adjacent parks and reserves here […] 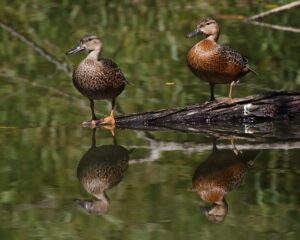 Tips from our favorite bird photographers

Alan Lenk I began taking photos in my early teens. Photography was a hobby of my Dad’s and he no doubt sparked my interest. Unlike my father, who photographed mainly family and friends, my photo interests were broader. My passion was the natural world: plants, animals, and the earth’s natural features. Bird photography itself came much later and might just […] 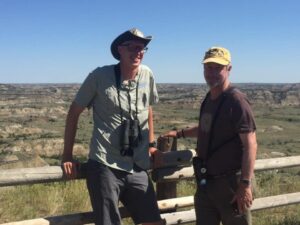 June 20-28, 2021 Narrative and Photos by Clifton Avery Our weeklong tour in North Dakota focused on birding in the central ‘Prairies and Potholes’ region all the way west to where the landscape dramatically shifts to the Badlands. Baird’s Sparrow, Sprague’s Pipit, Piping Plover, Brewer’s Sparrow, and Long-billed Curlew were a few of the target […]