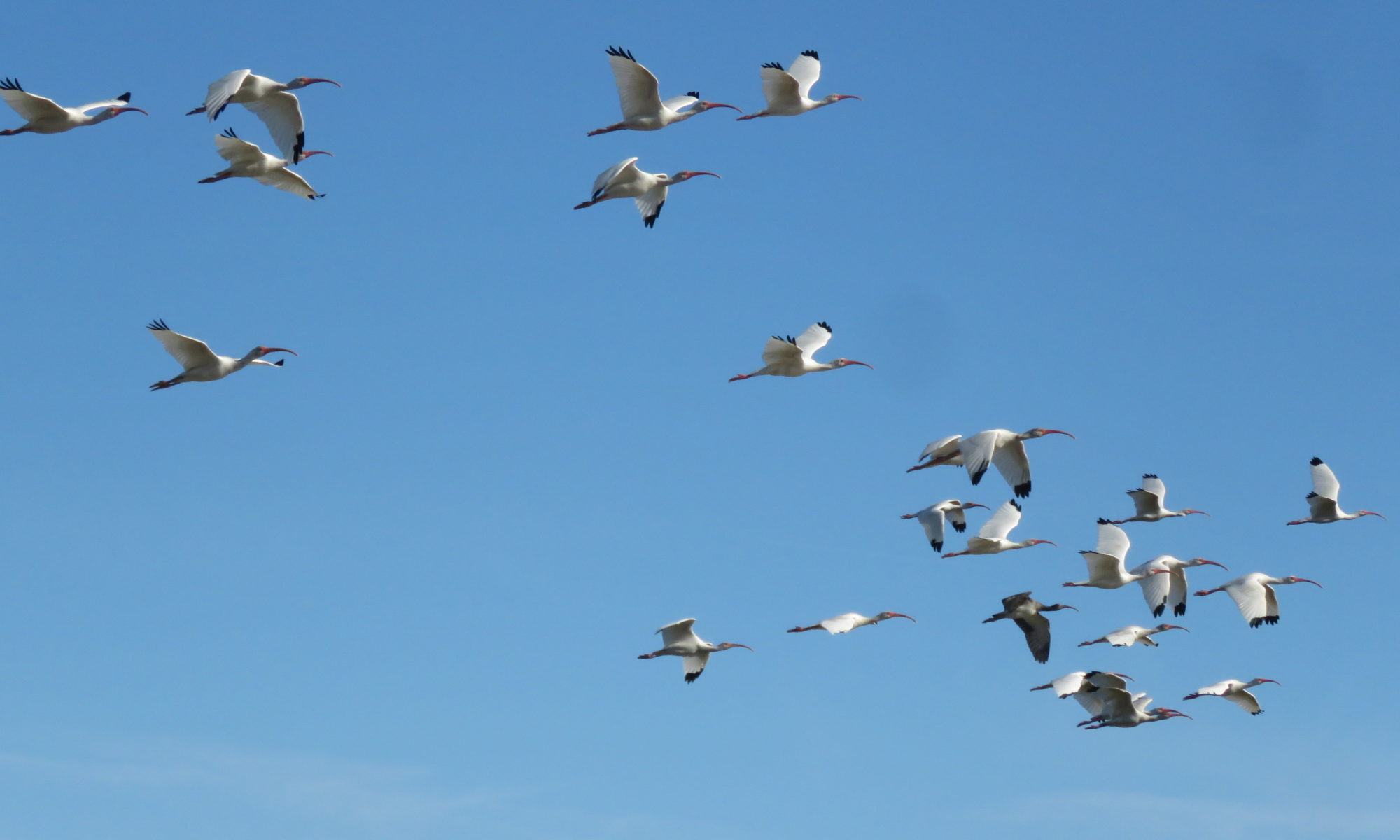 Some of us drove and some took a plane, but we all ended up at the hotel in Iowa (“Eye-oh-way”), Louisiana at the correct time! Thank goodness for cell phones, so we could at least keep track of each other on our cross-country perambulations!

Our “Beat the Crowds” rail trip that first afternoon was postponed due to the heavy rain earlier in the week, so we all joined a very pleasant, albeit foggy, trip along some quiet side roads in the rice country. One of our first birds was a Dickcissel, closely followed by great views of both Sedge and Marsh Wrens – all excellent birds to start our trip.

Flocks of Greater White-fronted Geese flew over and we had our first (of several) Vermilion Flycatchers of the tour. A brief stop in a pine lot was amazing with a day-time roost of 20 or so Barn Owls – more seen in one day than many of us had seen in our lifetime!

One of the attractions of the festival was the food, although vegetarian options can be challenging at times. After a classic Cajun sausage meal our first evening, we moved on to crawfish etouffee, catfish bites, shrimp and a veggie plate – definitely something here for all of us.

Our afternoon activity was walking (well maybe clambering) through a very tufty and overgrown field looking for sparrows. Sedge Wrens were the default little brown bird that we flushed, but eventually Casey spotted a very furtive sparrow which turned out to be a Henslow’s.

Waterbirds are a predominant feature of the area, with huge flocks of White-faced Ibis being abundant, along with White Ibis, and Roseate Spoonbill. Flocks of Snow and Greater White-fronted Geese were constant sights and sounds as they flew overhead and the most abundant duck was Northern Shoveler with smaller numbers of Gadwall, Blue-winged Teal, Mallard and Green-winged Teal.

Thankfully we had low ticket numbers for the combine rides, so we could head out birding before returning to the rice fields for our turn on the combine harvesters. One of our first stops was the wonderful water treatment plant in Crowley. Here we were able to walk around at our leisure and enjoy the vast numbers of Black-bellied Whistling-Ducks, Redhead and American Avocet.

A large flock of Tree Swallows was feeding low over the lake and it didn’t take us too long to find Cave, Barn, Northern Rough-wing and even Bank amongst the horde!

The combine rides and observing the rails as they escape from the harvest are the undoubted star attractions of the festival and while the rails are easier to see from the sidelines, how often can one ride a combine harvester?

Covered in dust and chaff we all saw Sora, King, Virginia and Yellow Rails as they flushed from the fields, but the bumping of the combine made using binoculars and cameras almost impossible. However, as the combines cut the rice swaths into smaller and smaller sections, the rails became concentrated and soon flew out into the adjacent fields. This is when the photographers had a fighting chance of getting pictures.

Cameron Parish is probably the most bird-rich parish in Louisiana, so we spent the next 2 days exploring the marshes, cheniers (coastal woodlots), shore and fields of this coastal parish.

A flock of Sandhills soared out of the morning mist, revealing a single image of black and white flying alongside them – a Whooping Crane. Although it was a distant apparition, we all got to enjoy in-flight views of this rarity.

Loggerhead Shrikes, American Kestrels and both Vermilion and Scissor-tailed Flycatchers were “wire-birds” along the roadsides and pairs of magnificent Crested Caracaras sat on nearby fences and trees, as multiple Northern Harriers quartered the fields.

A picnic in Peveto Woods; a Baton Rouge Audubon Sanctuary was a great place for late migrants, such as Yellow-billed Cuckoo, Red-eyed and Yellow-throated Vireos, Eastern Wood-Pewee, Blue Grosbeak and a handful of warblers: Tennessee, Bay-breasted, Northern Parula, Chestnut-sided and Magnolia.

The adjacent beach held the common and regularly-occurring Black-bellied and Semipalmated Plovers, along with the more uncommon Piping and Snowy Plovers, while the mixed tern and gull flocks contained all of the expected species, such as Ring-billed and Laughing Gulls, Caspian, Royal and Forster’s Terns, as well as Gull-billed Tern and several Franklin’s Gulls hiding among the many Laughing.

Highlights of the trips had to be the stake-out Say’s Phoebe in a sports field, a picnic lunch in a quiet cemetery, a pelagic Harrier (why?) and a Hermit Thrush that we “chased” up a road in the marshes.

It was then off to the closing dinner for the 2019 Yellow Rails and Rice Festival; an evening of heavy hors d’oeuvres and socializing- a very pleasant end to the week. It was then some morning birding before some of us drove and some of us took a plane back to our respective homes.

Here are a few more birds (and one reptile!) from the trip: