By Kevin Burke (photos by Kevin unless otherwise noted)

Maine was fabulous this year! We had enough demand to run two trips back-to-back. The first tour started on June 11th and the second tour ended on July 1st. This is a compilation of the two trips including highlights from each tour.

The biodiversity in the state of Maine is astounding.  Rocky coastlines outline the Eastern edge of the state giving way to large tracts of hardwood forests, lakes, with stands of boreal forest in the northern regions. This gives Maine a huge diversity of birds and we aimed to see as many as we could. Mammals were of great interest on this trip as well. Marine mammals such as Atlantic Gray Seal, Harbor Seal, and Harbor Porpoise are common off the coast. Moose, Snowshoe Hare, and Porcupines are always a treat to see on land. One cannot forget to mention the awesome seafood that comes from the cold Maine waters too. Lobster, Halibut, and Scallops were all on the menu! The two trips ran on opposite courses but visited the same places.

We all met on both trips in Portland. This is a great city right on the water. It offers great views, awesome dinning, and good birding. The group visited one of the more famous birding locations in the state just south of the city in Scarborough, Scarborough Marsh. This is one of the best spots to view breeding Nelson’s and Saltmarsh Sparrows in the state. Willet, Glossy Ibis, and Snowy Egret also breed in the area.

A few short miles away is Pine Point Beach, were we viewed Roseate Terns flying in and out of the inlet along with Least and Common Terns and Piping Plovers.

One of the most interesting birds we saw on both trips was a Snowy Owl. This large owl was supposed to be up on the Tundra in June but stayed around for several months on a small stretch of coast between Drakes Island and Kennebunkport. We had great views on both trips. This was not a bird we were expecting to see on our summer tour of Maine!

Kennebunk Plains is another fantastic spot near to Portland where we observed Clay-colored Sparrows, Prairie Warblers, and Upland Sandpipers all defending territory!

The Gilsland Farm Audubon Center is also a great place to bird where we picked up a long staying Little Egret.

Moving away from the Portland area we made a stop in Bangor at another great birding spot, the Bangor City Forest/Orono Bog Boardwalk. The 680-acre forest is a great place for breeding warbler and the one-mile loop bog board walk is known for its unique flora. Pitcher Plants and Cinnamon Ferns are abundant here.

We were looking for breeding warblers and got into a nice flock of them: Nashville, Canada, Blackburnian, and Magnolia. We were walking down the trail observing a mixed flock of warblers when out popped a Black-and-White Warbler and landed on one of the participants’ legs! The Orono Bog Boardwalk has cooperative breeding Palm Warblers and White-throated Sparrows. This is a fantastic place to walk around for a couple hours or all day.

A trip to Maine would not be complete without a visit to Acadia National Park. We spent a couple nights here on both tours. The rocky coastline is always a treat to see. Common Eiders raise chicks on the rocks just offshore. Black Guillemots are common in the water just offshore.

A family of Barred Owls put on quite a show at the Sieur de Monts garden in the Park.

We witnessed a Peregrine Falcon guarding its nest by harassing the Turkey Vultures flying by. Both tours were lucky enough to get reservations to go up early and visit Cadillac Mountain. The highest peak in the Park, Cadillac Mountain is the first place the sun hits as it rises in the United States. However, we opted to go a little later as the sun rose around 4:45.

On the first tour we took a whale watching trip out of Bar Harbor to look for pelagic species. We were delighted to find Northern Fulmar, Great Shearwater, Wilson’s Storm-Petrel, and Sooty Shearwater. Marine Mammals on the trip included Fin Whale, Harbor Porpoise, and Harbor Seal.

The second tour took a different boat out of Stonington and got views of the last Great Cormorant breeding colony in the U.S. and a single fly by Leach’s Storm-Petrel. We could have stayed in the Acadia area for quite a while, but there was more of Maine to see!

The next place we visited was Machias area. There are many small coastal villages here in Washington County. This area is known as “Down East” because to get here ships sailed down-wind and heading East.

The highlight of this area, and probably of the whole tour was a trip to Machias Seal Island. This island is 10 miles off the coast of Cutler, Maine and has the largest breeding colony of Atlantic Puffins in the U.S.

Razorbills, Artic Terns, Common Murres are among the other birds that nest on the island. This is one of the coolest wildlife spectacles that you can witness in the US!

We took the only boat that is allowed to land on the island. After arriving on the island we were ushered onto a helicopter pad. Artic Terns were flying overhead and would dive bomb if you get too close to a nest. Sometimes the nests are inches from the raised boardwalk, so you must stick your hand in the air to not get struck.

There are several blinds on the island which we all spent an hour observing from.

The puffins and razorbills are mere feet away.

A lone Northern Gannet was on the island roosting in front of the blinds for great views.

The Machias area has a lot of other destinations for great birding. We visited the Easternmost point in the U.S., West Quoddy Head State Park. This is a great place for sea watching and we had Razorbill, Common Eider, and a Minke Whale from the lighthouse. A Short-tailed Weasel raiding a Winter Wren nest was one of the highlights of both the tours for me!

We had lunch in Lubec just down the road and counted birds in Canada across the channel. It was about 200 yards across, and we counted five species on Campobello Island, New Brunswick, Canada. The Maine Coast Heritage Trust maintains several awesome properties that are great for birds. We visited Boothead Preserve and had breeding Magnolia Warbler, Yellow-bellied Flycatcher, and Lincoln’s Sparrow.

One of my favorite spots in the area is Great Wass Island Preserve, a Nature Conservancy property near Jonesport that has a great five-mile loop trail through maritime forest and along rocky shoreline. Bald Eagles are plentiful here, as are Yellow-rumped Warblers, Red-eyed Vireos, and Red-breasted Nuthatches. Down East Maine never disappoints!

It was time to move on to the more northern part of our tour. We drove northwest from Machias and ended up near Millinocket. This town is the gateway to Baxter State Park and Katahdin Woods and Water National Monument, the two places we would go looking for boreal species. These are remote parks with long stretches of gravel road.  Baxter State Park is famous for being the northern terminus of the Appalachian Trail. We saw many backpackers and day-hikers during our time here. Ruffed Grouse were abundant here.

Least Flycatchers were at just about every parking area and we found breeding Common Goldeneye on a small pond.

Olive-sided Flycatchers were also abundant here. We got into a great warbler flock with Blackpoll, Magnolia, Northern Waterthrush, and Nashville. Philadelphia Vireos were patrolling the stream sides.

Katahdin Woods and Water National Monument is a new national monument, established in 2016.  It is in a very remote area and takes over an hour to get to from Millinocket. Upon arrival there is a gravel loop road around the park with several pull-offs. We did not see to many other vehicles out here at all. This Park provides some of the best views of Mt. Katahdin accessible by car and we had astonishing views of the mountain.

In the campgroung parking lot, we had Yellow-bellied Flycathcers defending territory, the winnowing dance of a Wilson’s Snipe, and Northern Waterthrush.  A family of Canada Jays were just down the road. A Black-backed Woodpecker drummed from one of the bogs. We saw a Moose foraging in Lynx Pond and a Mourning Warbler sang on territory, but never showed itself. This Park has one of the highest densities of Canada Lynx in the U.S., although they alluded us on our trips, it was nice to know they were in the area.

At this point we had visited a large portion of Maine and needed to return to Portland for departures. On the way back down, we visited Messalonskee Lake, the site of the only breeding Black Tern colony in Maine. It also happens to host a pair of breeding Sandhill Cranes!  Willow Flycatcher, Osprey, and Warbling Vireo rounded out the great birds seen at the lake.

There were too many great adventures in Maine to fit into this post! The birds were awesome, the groups really got along well, and the seafood was outstanding. I think I ate enough Lobster to hold me over until next year. Maine is one of those states that you must get to at least once in your life. Every time I go I find something else to love about it. If you are considering this trip I highly recommend signing up! The 2022 dates are already up on the website. 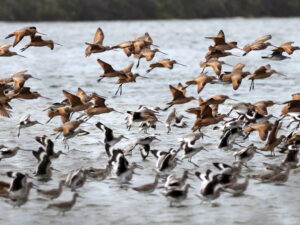 October 8 – 11, 2021 Narrative and Photos* by Kevin Burke *Thanks to Simon Thompson and Jonathan Cooley for some great photos! Fall on the Outer Banks is always a treat. Migrating warblers can be seen flitting in the woods, and waterfowl are starting to show up on the impoundments. We visited Alligator River National […] 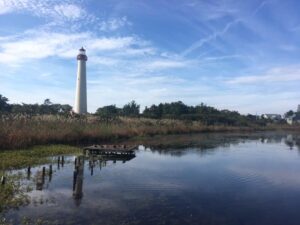 September 28 – October 5, 2021 Narrative and Photos* by Simon Thompson *Some great photos by Bob Butler too! We all arrived in Philadelphia by means of plane, train and automobile and met at our hotel on the banks of the Delaware River. With a group of us and the somewhat interesting logistics in today’s […] 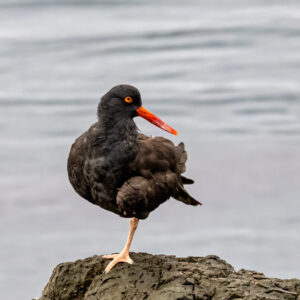 August 13 – 21, 2021 Narrative and Photos* by Kevin Burke *Some great photos by Martine Stolk too! August is a great time to visit the diverse state of Washington.   Our annual Venture this year was amazing!  The weather in Washington is August is beautiful.  An average of only 4.5 days of rain in the […]