Dauphin Island is a special place to bird in the Spring.  Picture this, you are a Scarlet Tanager set up on the Yucatan Peninsula about to make the long journey across the Gulf of Mexico.  You are there with fifty to sixty other Scarlet Tanagers gorging yourself to make the long crossing.  Something instinctual tells you and the others to lift off and take flight.  So, you fly over five hundred miles of open water.  Depending on the winds it could take a day or two.  When you finally reach land, you are totally exhausted and need to refuel.  You see some preserved tracks of forest on a small island and head toward it.  You have arrived on Dauphin Island.

This is the migratory route of hundreds of thousands of birds throughout Spring.  Dauphin Island is the first land many of these birds see after a treacherous open water crossing.  Tired birds, coupled with an island community that has obviously worked hard at preserving what it can to help the birds makes for some awesome encounters.  We spent an awesome five days down on the island.  The people were great, the birds were awesome, and the seafood was outstanding.  Here is an overview of the trip.

Arrival day was April 18th.  We all met at the Gulf Breeze Motel for check-in and introductions.  Once acquainted we went to the most popular birding spot on the island, Shell Mounds Park.  A nice stroll around this great preserve is a must on most every day.  The first birds that we got to see out of the car were a pair of Summer Tanagers.  It was nice to compare the male and female side by side.

A pair of Black-bellied Whistling-Ducks were found at the corner of a small pond.  Great-crested Flycatchers sounded off from the trees.  We also got our first glimpse of a few warblers including Blackpoll, Black-and-white, and American Redstart.  This was a great way to get to know part of the island and each other.  Dinner that night was at Pirates, a local place with a great view of the water and dunes.

The first full day of birding started before breakfast with a brief walk down the street from the hotel.  I will say that the birding at the Gulf Breeze Hotel is great too.  Every morning and evening the Clapper Rails would welcome us.  Very friendly Laughing Gulls and Brown Pelicans sat on the hotel dock waiting for an extra meal.  Down the street we had nice looks at Cape May Warbler, Orchard Oriole, and Indigo Buntings.

It was a good way to start the day.  The first stop after breakfast was the Shell Mounds again to see what had dropped in overnight.  Magnolia, Blue-winged, Worm-eating, and Hooded Warblers all put on a good show.

The rest of the morning was spent at the Audubon sanctuary wandering the pristine maritime forest.  We watched a Green Heron and a Fish Crow build their respective nests.

Highlights from the rest of the day included a stop near the Goat Tree preserve which produced a beautiful male Painted Bunting.  The final stop of the day netted one of the main targets of the trip.  We stopped at Fort Gaines and had a Black-whiskered Vireo foraging in the trees.  It let us have awesome eye level views for about ten minutes.  What a great way to end the day.

Day two started out at the Dauphin Island Airport.  The airport backs up against a massive salt marsh that is ideal to look for secretive marsh species.  We had a very vocal Marsh Wren right next to the parking lot that gave us fleeting views.  Clapper Rails clapped in the marsh and we had scope views of the secretive Seaside Sparrow.

The rest of the day was spent popping around the popular spots on the island.  It was a little windy this day so we decided to bird in the cover of the forest.  We had great looks at several warblers including Prothonotary, Northern Waterthrush, Hooded, and Palm.  It was also our best thrush day with quite a few Wood Thrush, a Veery, and Swainson’s Thrush.  We finished off the day with an awesome seafood boil from a local fish house.

Day three was a lot of fun!  We took the ferry across Mobile Bay to Fort Morgan.  Fort Morgan can be great for birding and has a lot of similar habitats to Dauphin Island.  The ferry ride was a lot of fun with tons of Laughing Gulls and a few tern species including Sandwich Tern escorting us across.  The Fort fields held Blue Grosbeaks, Eastern Meadowlarks, and Black-bellied Plover.  An American Kestrel and Merlin hunted the fort, with the latter giving us good scope views.

The highlight of the Fort was going to a banding station and getting to release a few birds. Participants got to release a Brown Thrasher and an Ovenbird.  We headed over to Gulf Shores to pick up a few species we hadn’t seen yet and had lunch at a local park with Red-headed Woodpeckers, Brown-headed Nuthatches, and a cooperative Fox Squirrel.  We also made a quick stop at the Gulf Shores State Park nature center to visit their Purple Martin houses.  The ferry back to Dauphin Island was full of the same crew of birds that escorted us over.  We did pick up Herring Gull and a few Bottlenose Dolphin.  We ended the day back at the Shell Mounds Park for a quick spin.  Dinner was at a very local fish house off the island.

The last full day of the trip was the least windy of all the days, so we decided to do a morning walk on the beach.  We met at the hotel where the tide was low enough to expose a sand bar out in the marsh.  American Oystercatchers and Black Skimmers were hanging out for some good scope views.  Our beach walk was very productive.  We were in search of shorebirds and were not disappointed.  We had great side by side looks at Snowy Plover, Semi-palmated Plover, and Piping Plover.

It was awesome to see these birds all at very close range.  Short-billed Dowitcher, Willet, Sanderling, and Short-billed Dowitchers were also present.  We had planned to walk quite a ways but with the birding being so great right off the pier we didn’t need to.  The return walk netted us Savannah Sparrows foraging in the dune grasses.

The rest of the day we visited all our regular spots.  The airport had Spotted Sandpiper and Least Sandpiper.  The Shell Mounds had a good selection of warblers with Blackpoll, Worm-eating, and Cape May.  We took a lengthy walk at the Audubon Sanctuary and had more Osprey than we could count.  A perched Peregrine Falcon let us complete the falcon sweep for the week.  We finished the day with our final dinner at Pirates overlooking the water.

Departure day arrived, but not before we got a little birding done.  A few of us walked out early to the pier and visited a Snowy Plover on nest, at a safe distance.  We had multiple views of Clapper Rail in the tidal ponds and heard a Least Bittern under the pier.  A good way to start the final day!  When we got back to the hotel eight American White Pelicans had landed in the bay.  It was hard to miss those massive white birds floating in the water.  The final walk of the trip was spent at Shell Mounds Park and the adjacent Stu’s Woods.  We had the best flock of warblers of the trip as our send off.  The highlights were: Northern Waterthrush, Northern Parula, Cape May, Blackpoll, Worm-eating, and American Redstart.  All of these birds were at or near eye level foraging around the sanctuary.  A great send off!

Dauphin Island is a ton of fun and an easy tour.  We had a blast with a ton of great birds at or near eye level.  The seafood is top notch and plentiful, and the accommodations are nice.  The slow pace of life on the island makes this a relaxing way to get some great birding done.  Please think about joining us on future Dauphin Island trips. 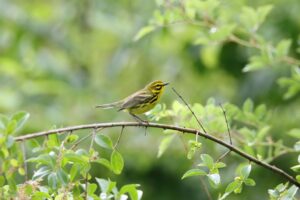 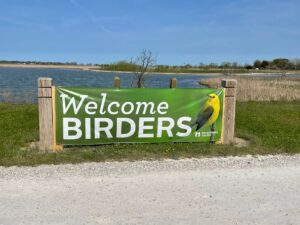 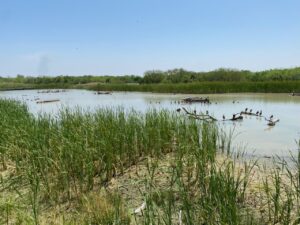